Uhlmann, L., Pazen, M., van Kemenade, B., Steinsträter, O., Harris, L.R., Kircher, T. & Straube, B. (accepted). Seeing your own or someone else’s hand moving in accordance with your action: The neural interaction of agency and hand identity. Human Brain Mapping

Forward models can predict sensory consequences of self-action, which is reflected by less neural processing for actively than passively generated sensory inputs (BOLD suppression effect). However, it remains open whether forward models take the identity of a moving body part into account when predicting the sensory consequences of an action. In the current study, fMRI was used to investigate the neural correlates of active and passive hand movements during which participants saw either an on-line display of their own hand or someone else’s hand moving in accordance with their movement. Participants had to detect delays (0-417 ms) between their movement and the displays. Analyses revealed reduced activation in sensory areas and higher delay detection thresholds for active versus passive movements. Furthermore, there was increased activation in the hippocampus and the middle temporal gyrus when someone else’s hand was seen. Most importantly, in posterior parietal (angular gyrus and precuneus), frontal (middle, superior, and medial frontal gyrus), and temporal (middle temporal gyrus) regions, suppression for actively versus passively generated feedback was only present when the participant’s own hand was displayed. Our results suggest that forward models can take hand identity into account when predicting sensory action consequences. 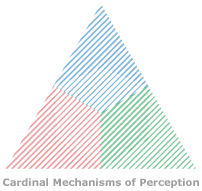